Compatible gels: Any protein band which can be visualized by Coomassie brilliant blue staining or silver staining can be identified using this method. We require high resolution pictures of gel (Coomassie/Silver/Sypro Ruby/2D) before and after band excision

WE ACCEPT GEL BANDS FROM

In case of known recombinant or other proteins, the protein sequence information needs to be provided along with the samples. 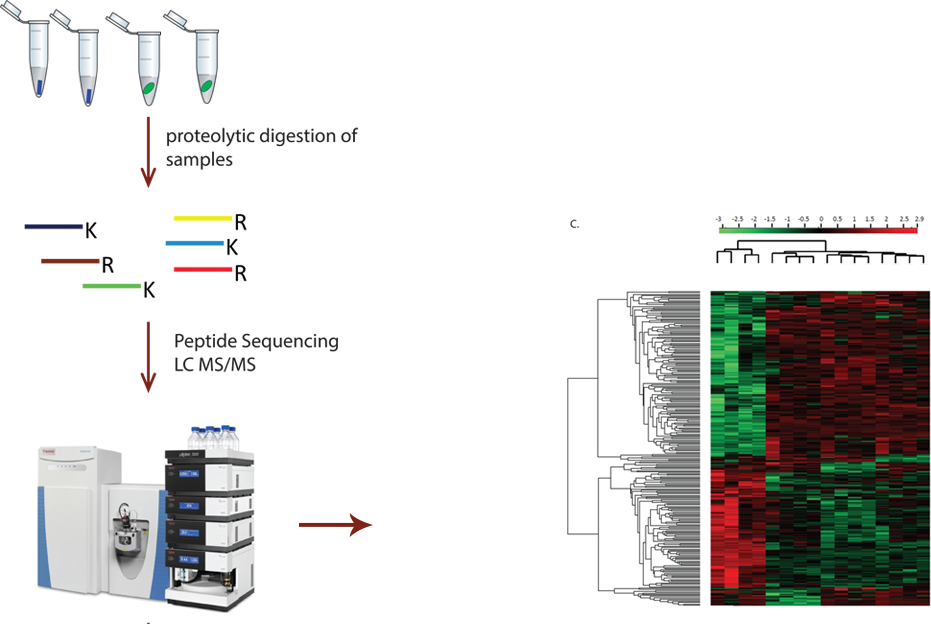 The samples will be trypsinized followed by cleaning using C18 columns before analysis on Orbitrap mass spectrometer.

Running protein samples on a gel prior to proteomics analysis has many advantages. Gel removes any foreign particles/substances which are not compatible with downstream analysis using mass spectrometry. The environment we work in is highly polluted with keratin that came from our heads, skin, nails, fingerprints, woolen clothing, and etc. Other rich sources of keratin contamination include paper and cardboard containers. Since mass spectrometers detect proteins at femtomolar levels, the slightest contamination of keratin will result in keratin being identified as the most abundant protein versus being able to identify the proteins that really interest you. Other types of protein contamination such as bovine serum albumin and milk proteins usually come from a staining tray which was previously used to develop a western. Therefore use a brand new staining tray.

SDS PAGE gel: Use high quality reagents for gel preparation, Fresh buffers, and use nitrile gloves for handling the gel, use fresh staining and de-staining solutions. Avoid any dust (Keratin) when gel tray, solutions are exposed to air.

For staining the gels use Coomassie Brilliant Blue or MS-compatible silver staining kits from available vendors.

In case you have used non-compatible silver stain, do let us know to take further steps to get enhance protein recovery.

Again, however, we strongly encourage users to use Coomassie brilliant blue instead of silver.

We discourage users from submitting silver stained gels for the following reasons:

How do I know which stains to use for gel staining and how much protein is required for successful MS analysis?

Ans: For Coomassie brilliant blue staining we recommend to use lab made solutions. Using dust free glassware and fresh solutions are necessary to get good results. Please check the instructions in earlier paragraph for more understanding. You can use commercial available MS compatible stains also for staining the gels. Please excise the gel band of interest as thin as possible with as little excess empty gel as possible. In-principle any Coomassie brilliant blue stained band would be identified by our highly sensitive MS machine. In case of silver staining the detection sensitivity depends on many factors as explained in earlier section. You will provide details regarding your method of protein preparation along with available gel pictures and organism database. We will trypsinize the gel bands ourselves and provide you the best results possible.

I suspect that my sliced gel band may contain many proteins. How do I know which is the right protein for me?

I wanted to identify phosphorylation on my protein of interest how much protein is required for successful MS analysis?

Ans: Any Coomassie brilliant blue stained band would be identified by our highly sensitive MS machine at MS and MS/MS level. If a protein sample is in a concentration around 100 fmole/μl, loading 10 μl per lane should result in about 1pmol protein per lane. A protein band of >1 pmol can be visualized by several type of stain (Coomassie colloid, Zn, Cu, etc) and identification of protein in such a gel band is often not very challenging to us. We use state of the art columns, chromatography, mass spec machine and data analysis tools to get best results for you. The maximum coverage of protein depends upon protease digestion efficiency as well as sequencing of peptides inside the mass spec. We use our own Lab controls for checking trypsin digestion efficiency. The stoichiometry of phosphorylated versus non-phosphorylated form in your sample have major role to play in successful identification of phosphorylated peptides. Our machine has sub-femtomole Limit of detection (LOD) and In–principle if we assume that the phosphorylated peptide present in you sample exists in this range and fly well followed by sequencing inside the mass spec machine, we will be able to identify phosphorylation in your sample.

What is the advantage of your nano-ESI MS/MS compared to MALDI-TOF/TOF?

Ans: We utilize chromatography gradients to separate the peptide mixture based on their hydrophobicity. This decreases the complexity of the peptide mixture and thousands of MS and MS/MS scans are performed during the machine run. The machine gets sufficient time to enrich peptides in ion trap before their MS/MS sequencing. In this way not only the coverage of the protein increases but also result in better quality data than MALDI-TOF/TOF. In MALDI-TOF/TOF analysis all the peptides present in the mixture fly simultaneously during laser excitation and operator has to manually decide which MS/MS needs to be performed on the sample based on PMF (MS1) spectrum. In our method the machine utilize very smart automatic technologies like Automatic gain control (AGC) and data dependent acquisition (DDA) to sequence as many peptides as possible in the sample. We provide more coverage, better quality of spectrum and sensitivity compared to any MALDI-TOF/TOF technology available. Our technology very confidently identifies proteins, protein complexes, PTM modifications much better than MALDI-TOF/TOF.

This service is generally performed for protein samples prepared in mass spec compatible buffers. The samples must be free from salts, detergents, glycerol, PEG etc which interfere will proteomics analysis. 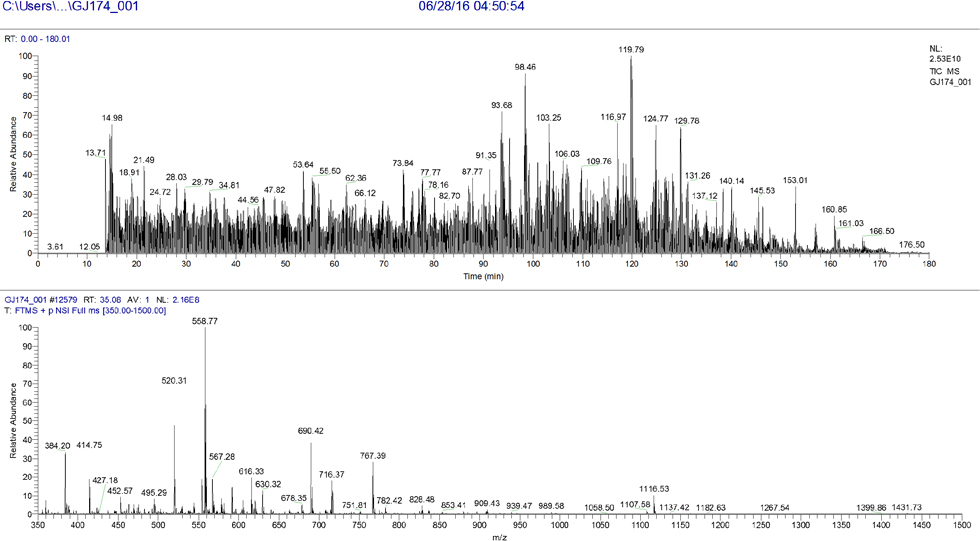 Generally the reports also include statistical data analysis reports along with graphics.
For advanced users who are interested to further analyze the data, support will be provided based on availability of time slots and extra fees.

My samples are in liquid form, how much protein is required for successful MS analysis?

Ans:This actually depends upon the type of experiment. Generally we load 0.5-1 µg of peptide mixture for a single run using 10-15cm column and 1-2µg of peptide mixture using 50 cm long column. If the protein is available in sufficient amount, we recommend trypsin digestion for minimum 50 µg of protein. Please discuss with us your sample preparation protocol to avoid contaminants which may interfere with protein digestion and sample analysis on Mass spec machine. After discussion of the suitable protocol we will get protein samples from you and perform trypsin digestion and further process in our lab.

What is the advantage of solution based proteome analysis as compared to gel based technique?

Ans: If your samples are having low level of complexity, we recommend running them on SDS-PAGE gel which removes contaminants and MS interfering substances. Just run for short time to allow the mixture of proteins to enter the stacking gel and concentrate as a coarse band. But not all the proteins are resolved well in SDS-PAGE gel especially membrane proteins. If you are preparing complex cell lysates using a proteomics compatible lysis buffer than solution based samples provide better results than gel based approaches in terms of number of peptides and protein identification. Many times experiments e.g. Pull down analysis, Protein-protein interaction, where starting material and resulting eluate protein concentration is very limiting gel based analysis may not be possible. In these special cases we recommend to use the trypsinized eluates directly for mass spec analysis. Please discuss with us your experimental requirements and we will be happy to provide you right strategy for successful outcome.

We perform the analyses of various posttranslational modifications (PTMs), for example phosphorylation, Acetylation, etc. Please contact us for details and to discuss your specific project. 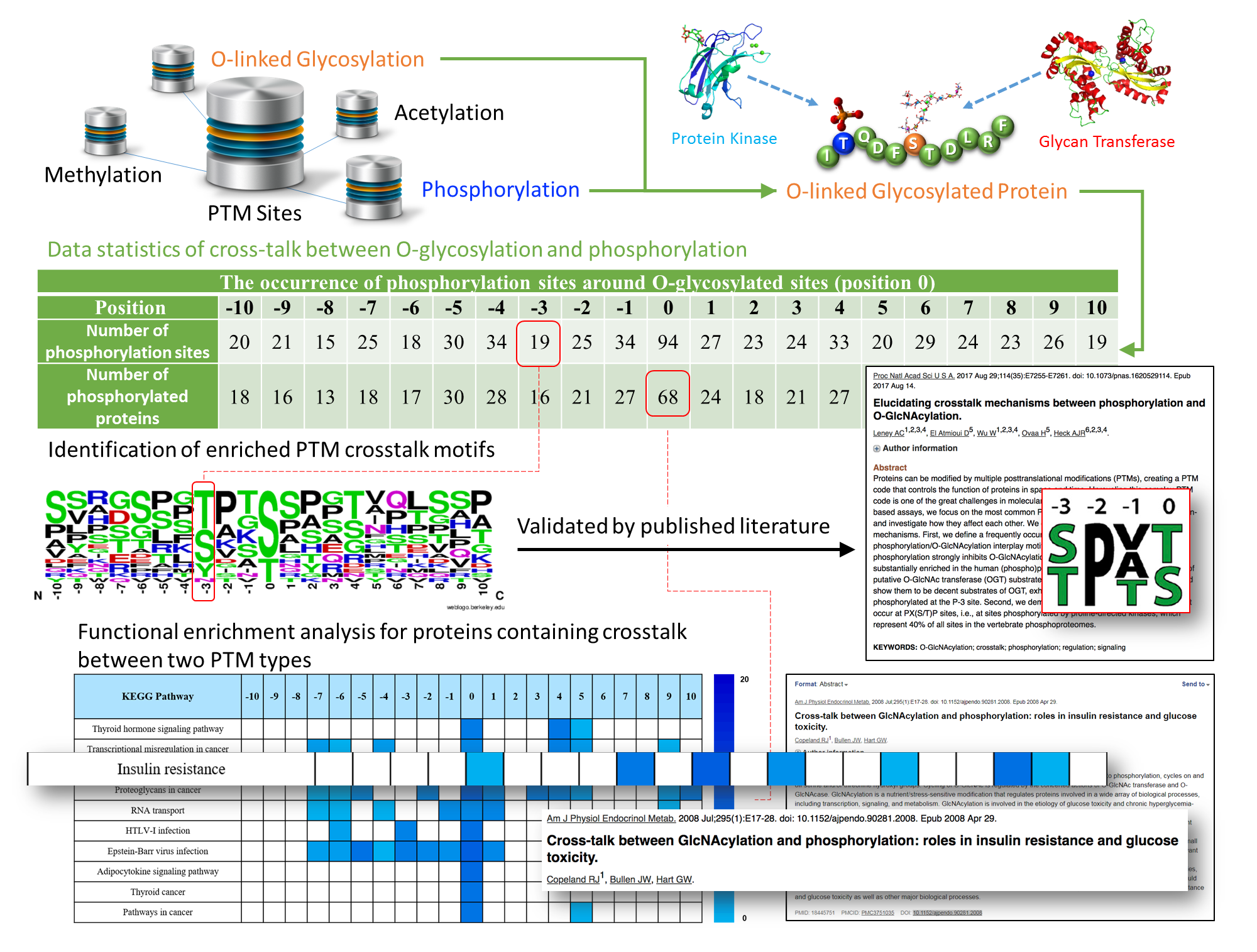 Unbiased proteomic studies can be performed using our high resolution Orbitrap mass spectrometers to provide accurate quantification data. We provide Label-free methods for both relative and absolute quantification, which are rapid and a low-cost alternative to other quantitative proteomic approaches. For differential proteomics analysis experiments, we generally recommend 3-4 biological replicates each condition to result in proper statistical analysis. 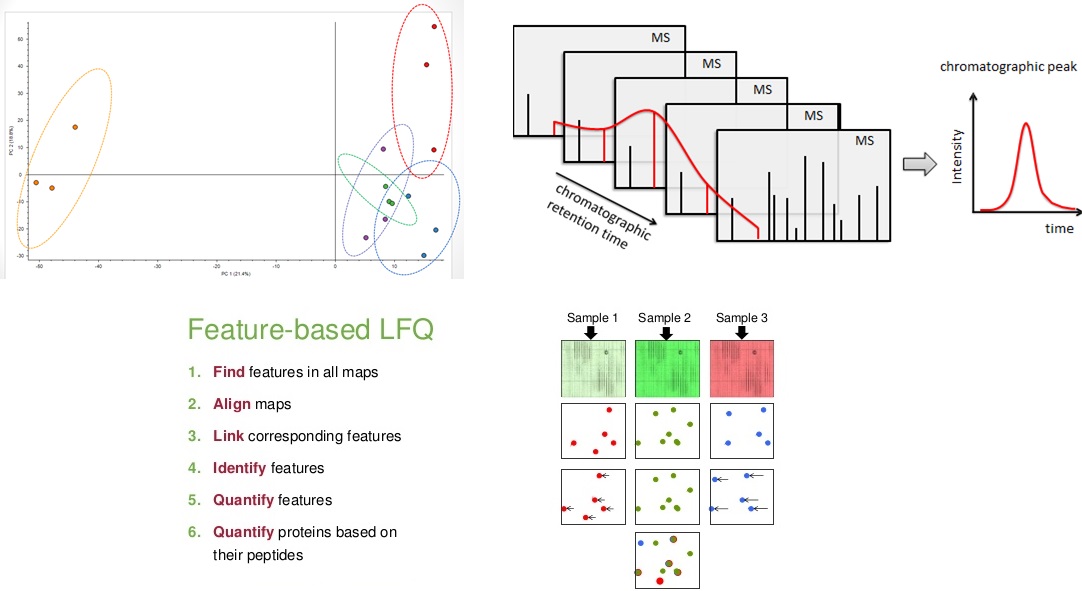 For the bulk identification of protein interaction partners, we commonly apply co-immunoprecipitation/co-affinity purification together with quantitative Mass-Spectrometry. For this, the protein of interest is enriched from the cells together with its interacting proteins, which are subsequently identified by mass spectrometry. Because such enrichment mixtures also contain contaminants (e.g. unspecific binders to affinity beads, IgG beads, antibody), a control sample not containing the bait is needed. In the end, true interactors can be distuinguished from contaminants by looking at their respective abundances in both samples. While contaminants are present in both samples, specific interactors are enriched in the bait sample.

We suggest to use covalently crosslinked antibodies to avoid heavy background of antibody chains in the final elution mixtures. 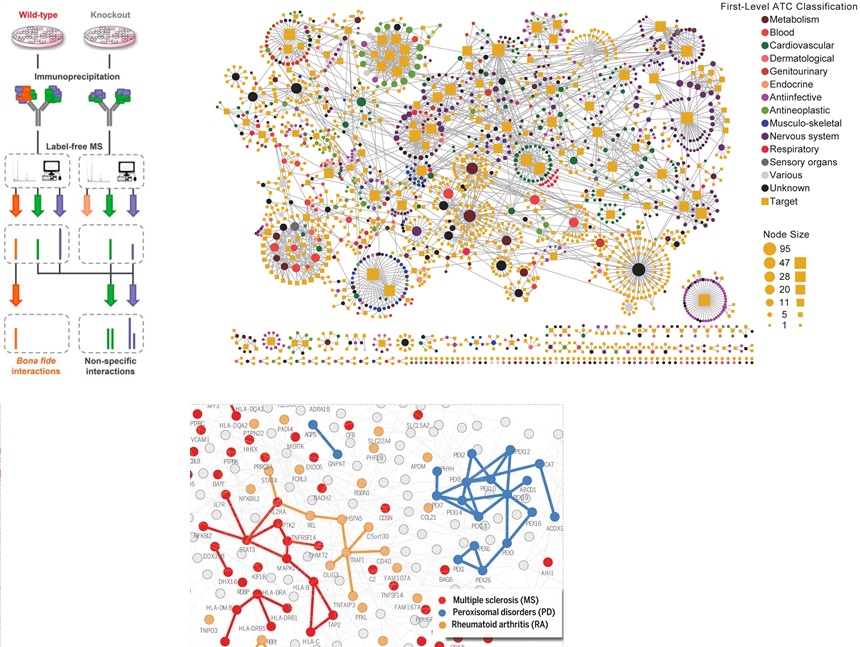 One of the biggest challenges in discovery proteomics is the identification and precise quantification of protein abundances in highly complex samples that can consist of thousands of proteins. The number of peptides released by these proteins during the sample preparation is high and generally exceeds the maximal number of spectra that can be acquired in the traditional data-dependent acquisition (DDA) workflows (also referred to as ‘shotgun’ proteomics). This known problem of undersampling can be circumvented by using an alternative acquisition method.

In data-independent acquisition (DIA) mode, all ions of the entire mass range are sequentially isolated in broader m/z windows and fragmented together. The resulting highly complex fragment spectra derive from multiple precursor ions what makes the data-analysis highly complex. One strategy to identify peptides at high confidence is based on peptide spectral libraries. Recent improvements in technology and software tools now enable identification of thousands of proteins using DIA methodologies with precise peptide identification and quantification (median CVs below 10%). peptide identification and quantification. 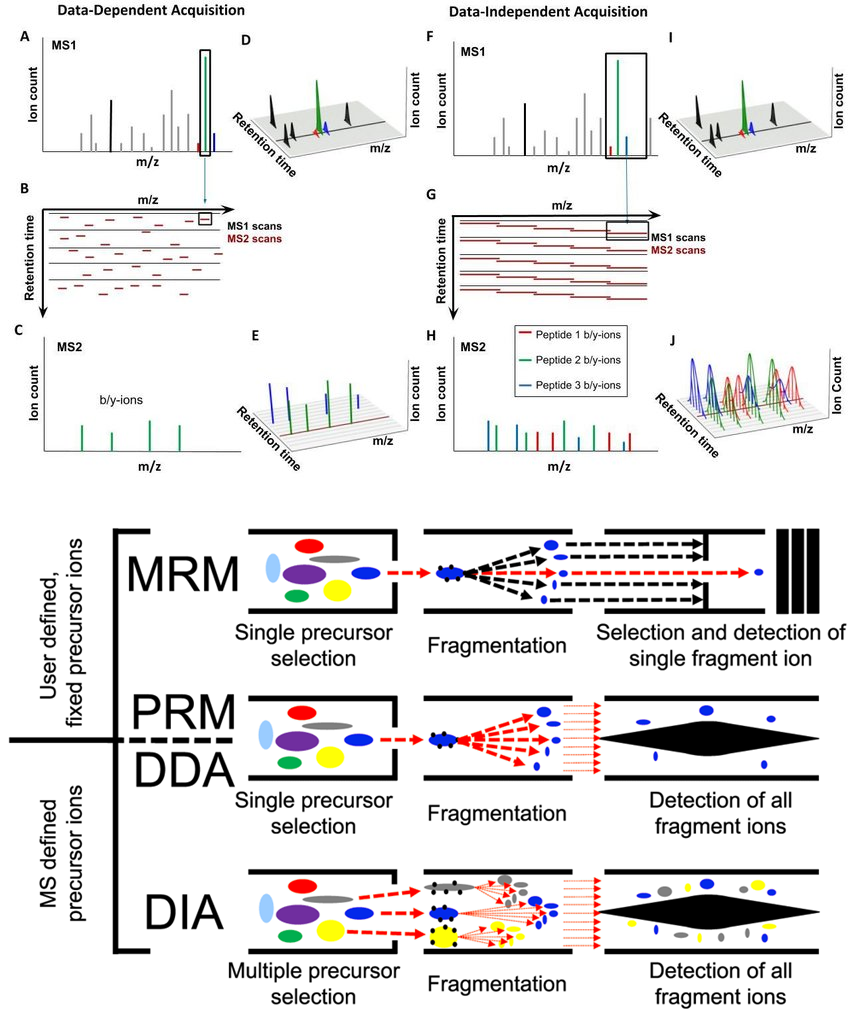 SRM/MRM can be used for targeted quantitative proteomics by mass spectrometry. Following ionization in, for example, an electrospray source, a peptide precursor is first isolated to obtain a substantial ion population of mostly the intended species. This population is then fragmented to yield product ions whose signal abundances are indicative of the abundance of the peptide in the sample. This experiment can be performed on triple quadrupole mass spectrometers, where mass-resolving Q1 isolates the precursor, q2 acts as a collision cell, and mass-resolving Q3 is cycled through the product ions which are detected upon exiting the last quadrupole by an electron multiplier. A precursor/product pair is often referred to as a transition. Much work goes into ensuring that transitions are selected that have maximum specificity.

Using isotopic labeling with heavy-labeled (e.g., D, 13C, or 15N) peptides to a complex matrix as concentration standards, SRM can be used to construct a calibration curve that can provide the absolute quantification (i.e., copy number per cell) of the native, light peptide, and by extension, its parent protein.

PRM (parallel reaction Monitoring) is based on high resolution mass spectrometer i.e. Q-Orbitrap .In PRM Orbitrap replaces Q3 and scans all product ions with high resolution and high accuracy. Therefore, PRM technology not only has the SRM/MRM target quantitative analysis capabilities, but also have the qualitative ability.